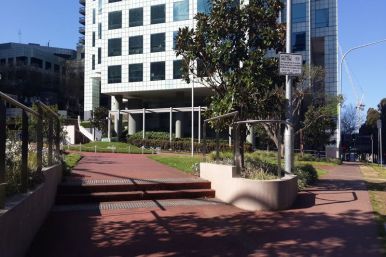 According to the North Shore Times, CHATSWOOD residents are outraged by a development proposal which has been described as “sacrilege”.

The North Sydney Planning Panel voted to approve the development application for 67 Albert Ave, right next to the Garden of Rembrance.

The application involves the construction of a 15-storey commercial tower valued at an estimated $57 million.

Residents claimed that “there will be complete overshadowing of morning sun to the garden, which understandably the RSL are distressed about.”

Since the development application was lodged in May 2017, a petition was created by residents opposing the development. But the Northern Sydney Planning Panel voted unanimously in favour.

Chatswood RSL manager Andrew Hoschke is reported as saying that “the garden is a place of quiet reflection for veterans and the community to go to seek solitude. There is no benefit at all to the community in putting up another commercial tower just for the sake of the developer making a quick buck. The garden was designed to record and remember all those wartime losses, if they go and die off that is basically sacrilege.”

Nearby residents are also furious at the fact they will have their views obstructed.

The development is on the same site as the Sage building and the land is owned by Willoughby Council. The land is leased  on a 99-year lease, which was signed in 2013. Before going to the planning panel, council endorsed the proposal. At Monday night’s council meeting residents and RSL members filled the gallery to plead their case.