Due to COVID-19 we have decided to hold our member meetings via ZOOM until further notice.

Our scheduled ZOOM member meetings are:

Note: These are MEMBER ONLY meetings. If you wish to participate, please become a member as outlined below.

This proposal is now open for comment on Have Your Say Willoughby. It involves: 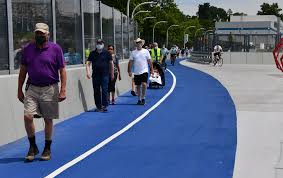 In July 2020 CWWPA wrote to Sydney Metro as follows seeking information about the proposed pathway which was a condition of consent. In July 2020 Sydney Metro replied as follows: “Sydney Metro is currently reviewing the need and opportunities for a pedestrian and cycle connection across the rail corridor to replace the Nelson Street Bridge, We will be able to provide more information on proposed options for the area when this review is completed.

Motion: CWWPA write to the WCC Traffic and Transport Team to emphasize the importance of a pedestrian and cycle connection across the rail corridor to replace the Nelson Street Bridge and confirm WCC is part of the Sydney Metro review process to determine appropriate options?

Vehicles traveling east along Albert Ave, enter the right-hand turn lane on Albert Avenue, the vehicle will then turn right into Archer Street heading south. The cycle of the traffic lights allows a right hand turn as soon as the lights go green ie, there is no separate right turn traffic light When the light turns green, vehicles turning into Archer Street (heading south) often do not see the pedestrians who are crossing Archer St from the Southeast to Southwest corner of Albert Ave at the same time. There have been some close calls.

Motion: CWWPA writes to the WCC Traffic and Transport Team, requesting WCC ask Transport for NSW, as the operator of the traffic signals, to review the situation and consider installing pedestrian safety measures (10 second start for pedestrians before vehicles get a green light) within the traffic light cycle (like at many other intersections) or a red right hand turn light that is activated when a pedestrian activates the crossing function for an appropriate time to allow pedestrians a head start before vehicles turn right.

In the light of the need for a national goal to achieve net zero emissions, there is a role for all Local Governments to assist to that end. One element of the Council role must be to adapt our urban infrastructure to reduce carbon dependence through energy and vehicle substitution to the extent possible. I hereby move that CWWPA write to Council:

We have received the following notice of motion. it will be considered at our meeting on the 24th September.

The Chatswood Golf Course site is strategically located between three native bushland reserves – Coolaroo, Ferndale and Lane Cove National Park. Willoughby Council has identified the importance of uninterrupted wildlife corridors linking these canopies. There is community concern regarding the proposed excessive loss of 255 x trees as documented in DA 2020/117 (Chatswood Golf Club Seniors Development). We are also concerned the Site Compatibility Certificate (SCC) was issued upon an Arboricultural Assessment Report that clearly proposed the loss of just 28 x trees, not 255 x trees as proposed in the Development Application (DA).

A subsequent issue is that 100 of the 255 x trees that are proposed to be removed in the DA actually fall outside of the approved SCC footprint (refer attachment). Given the dramatic change in scope relating to tree loss the current Development Application (DA) should be refused, and a new Site Compatibilty Certificate (SCC) application should be initiated.

The NSW Productivity Commission is recommending that the planning control systems be relaxed to allow developers to ‘get on with the job’ which they say is currently made difficult by the amount of ‘red tape’ (such as community consultation) restricting growth and the speed of application approvals.

The Commission is arguing that the Government had implemented an “overly complex, prescriptive and slow” system, which has hamstrung the ability of developers to respond to housing demand.

The commission wants the government to order councils to reassess housing supply capabilities in local government areas, while also calling on councils to revise housing strategies in areas where a lack of capacity is identified.

“Housing supply has failed to keep up with demand — that has led to an undersupply of housing, increasing the cost of living for households and making NSW a less attractive place to live,” he said. “Development applications are taking longer to assess, restricting housing supply and reducing affordability.”

No one has asked local communities what they think about these proposals. The most likely outcome will be less community consultation and the greater use of Exempt Development policies for bigger projects that have greater local impact.

There is a state-wide system called Planning Alerts (planningalerts.org.au). If you subscribe to the system (which is free) you can receive alerts about planning proposals in your area. The planning alerts system digitally “scrape” information from Council and State government planning systems and send you an email when it discovers a proposal near you.

Recently Willoughby Council changed it computer systems. At that point planning alerts for our area stopped working. This issue was raised at the Federation and CWWPA worked with other Associations to lobby Council to get the matter resolved.

Council interacted with the planning alerts people who have now responded:

Thanks for getting in touch and letting us know!

We had to make some changes at our end to handle the changes you made to your site but that’s all done and things are working again. See for example https://www.planningalerts.org.au/authorities/willoughby/applications

Please don’t hesitate to get in touch if you have any questions.

A misguided proposal by a couple of residents to extend the Victoria St Mall to Archer St has been kiboshed by Councillors. This idea surfaces every decade or so.

A report to the last Council meeting revealed that the budget needed to extend the Mall would be of the order of $37 million.

Due to the timing of the Council meeting and based on previous resolutions of the Association we wrote to Councillors prior to the meeting requesting that:

“No further work or expenditure be undertaken on the proposal to extend the Chaswood Mall further down Victoria Avenue until an investigation and report (including a budget) is completed and presented for the development of a CBD orbital by-pass.”

At the meeting Councillors voted unamiously to’Note’ the council officer’s report and recommendation. This effectively takes the proposal ‘off the table” as no further work on it by Council officers has been authorised.

At that Council meeting on Monday it was resolved unanimously:

That Council note the preliminary information provided regarding the potential for extension of the existing Chatswood Mall.

The motion on being put to the meeting was CARRIED to become the resolution of Council.

There is not an intention to further consider the extension of the mall at this stage. Given the importance of the Chatswood CBD to all areas of the Willoughby local area, please feel free to share this information with your members.

The North Shore Times has revived its print edition. This is now being delivered to household letterboxes. Unfortunately, it will only be delivered to 80% of households.

If you are one of the unlucky ones, they expect you to go and pick up your own copy (see the list of collection points at the end of this article).

The North Shore Times is available for you to read across the following channels: