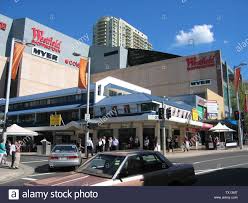 This intersection continues to be dangerous for pedestrians and problematic for buses and cars.

Pedestrians waiting to cross Anderson St on the northern crossing at the side of the Westpac Bank are at risk of being struck by buses travelling west on Victoria Ave turning right into Anderson St. It looks like the temporary footpath barrier was installed incorrectly. Action: pedestrian barrier on Anderson St (west side) needs to be extended to the entrance of the Mall.

Traffic regularly blocks the ‘scramble” type crossing elements at Victoria/Anderson/The Mall. This puts pedestrians legally using the crossing at risk of being struck by an illegally positioned vehicle if it moves. The situation is compounded as there is a non-pedestrian area within the intersection.

A significant contribution to the vehicles being trapped in the Victoria Ave/Anderson St intersection (heading south on Anderson Street) is due to this pedestrian crossing (between each side of Westfield).  If you look at the area on the weekend and on Thursday nights, there might be other times, it appears that a majority of activity at that crossing is pedestrian movements, which leaves the vehicles with few opportunities to proceed south towards Albert Ave, this in turn causes the traffic to bank back to the Victoria Ave/Anderson St intersection and vehicles to become trapped in the intersection when the lights are green (and they are still trapped there when the lights have gone red).

RESTRICTING VEHICLES IN VICTORIA AVENUE BETWEEN ANDERSON AND ARCHER

There has been a suggestion that this segment of road be restricted to public transport (buses) and emergency vehicles only. There has not been a rationale given for the proposal. The major implications of this proposal would be the need to construct a ‘CBD Ring Road’ or ‘CBD By-pass Rout”. This could have major impact on residential street to the north of Victoria Ave.

One thought on “Anderson & Victoria”