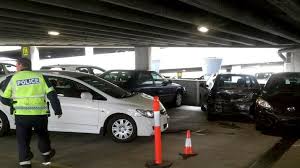 According to a AAMI study, Westfield carpark at Chatswood is the worst carpark in NSW for accidents. Shoppers prang into everything: shopping trolleys cop the worst, followed by walls, pillars and other things, very often when reversing … Christmas Eve is one of the busiest times of the year, and Chatswood’s Westfield car park had more prangs than any other parking lot in NSW.

Of the 24,000 claims lodged nationally for car-park dings and prangs, Chatswood ranked third, recording 104. It was narrowly defeated by Maroochydore with 105 incidents, but paled compared to the national winner: Chadstone in Victoria, which recorded 258 incidents. Castle Hill and Miranda were next worst in NSW.

Shopping centres are “bedlam” at this time of year. The results found there were 37 per cent more car-park crashes in December, totalling 2674 nationally, closely followed by January with 2185.

Almost one-third of all prangs occurred when a driver was reversing.  One-quarter of car-park collisions involved a stationary object such as a bollard, shopping trolley or pillar/ wall.

During the festive period when car parks are busy we find that once we pass the 5-minute mark we start to feel annoyed and impatient – and the longer it takes, the more frustrated we become as we are not meeting our goal. Shoppers under pressure are more likely to take risks and get emotional. “This can quickly escalate to driving erratically, which as we know is how accidents happen.

The fact that Westfield (CentreGroup) elected for a ‘pop-up’ valet car park in the Anderson St carpark certainly exacerbated shopper frustration. For much of the time these around 50 spots (offered at $10) remained vacant. The rest of the carpark was full.

To become a member of CWWPA, direct deposit $20* with your name in the reference field to BSB: 032090 Acct: 548083 & complete our Membership Application. Renewing members $10. *Non-refundable and subject to meeting membership criteria.