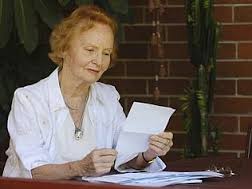 Judy and her husband Ern ran the news agency on the western side of Chatswood Railway Station for about 20 years and were stalwarts of the West Ward Progress Association. She also served on the Board of the Willoughby Retirement Village.

In the Australia Day Honours List in 2007 Judy was awarded the Order of Australia Medal for service to the community of the City of Willoughby through aged care and service groups and to local government.

Judy served four terms on Willoughby Council between 1978 and 1991.

During her terms on Council Judy and Councillor Greg Bartels would present joint reports on Council matters to the Progress Association. Ern Navin was Secretary of the Association for 20 years.

Judy was involved in a variety of local groups, including Chatswood Red Cross and the Chatswood Liberal Party.

She is survived by Ern, aged 99, daughter Alexia and sons Peter and Christopher, four grand children and four great grandchildren.

Her Funeral Mass will be held at Our Lady of Dolours Catholic Church, Archer Street, Chatswood on Tuesday May 3, 2016 commencing at 10.15am, followed by a cremation in the Palm Chapel at Macquarie Park Cemetery & Crematorium, Delhi & Plassey Roads.