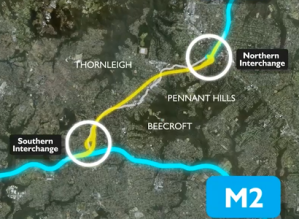 This re-announced proposal to connect the M1 (Sydney to Newcastle) to the M2 (into city via Lane Cove Tunnel) will by-pass busy Pennant Hills Rd. Whilst partly funded by Federal money, it has the potential to drain NSW of funds.

The history of long tunnels in the northern suburbs is replete with underbid contracts announced at politically convenient times: the sewer storage tunnel, the Chatswood to Parramatta rail line, the Lane Cove and M2 tunnels.  All these roughly doubled in price once construction was underway and roughly doubled again by completion.

The present stated cost is $ 2.7B for 9 kilometres of double three lane tunnels. So this could be closer to $12B by the time work is complete.

Whilst the tunnel is being built with 3 lanes each way, it appears that 2 of those lanes are ‘breakdown’ lanes and cannot be used for additional traffic (even in the future).

A further weakness of the proposal is the failure to include ramps to the Sydney side of the M2 motorway, which would require another couple of kilometres of branch tunnels, at an extra cost of the order $ 200 million.

There are unresolved issues on the location of exhaust stacks; the cost of ventilation tunnels to the stacks and particle filters (apparently omitted). Fire escape exits to the surface are to be provided at less than half kilometres spacing. The range of dangerous goods excluded from the tunnel needs expansion for long tunnels (two European long tunnels were closed for months after truck-loads of used tyres and butter caught fire).

As always, the customer pays! The occasional motorist may be willing to pay $ 6.11 toll, and has the alternative of the  surface Pennant Hills Road, with half the present volume of trucks. The Premier’s plan to force some trucks into the tunnels with a toll of $ 18.32 for trucks is problematic.

Finally, there  is no calculation of the Benefit /Cost  Ratio, which was so far below 1.0 that Infrastructure Australia refused to support Federal  funding. They have been over-ruled by politicians, and their senior staff changed. Barry O’Farrell has claimed twelve minutes time saved in each direction. In the present announcement, the number of truck trips benefiting has been “increased up” from 7,000 to10,000 truck trips per day, with a total capacity of 100,000 vehicles per day, the 10,000 trucks would pay $183,000 per day and 90,000 cars would  pay  $ 550,000 per day. Truckies could expect their small contribution to tunnel revenue to be increased if car usage is below forecast.

Assuming these revenues are achieved 365 days a year the annual revenue would be $267.5 million, which happens to be 10% of the intended construction costs.  The Lane Cove  Tunnel demonstrated that running expenditure will absorb most of the revenue, making interest free gifts of taxpayer funds necessary. The Roads Minister Mr. Gay needs to provide the correct calculations for the Benefit/Cost ratio.  By comparison, the RTA estimate of the B3 route Benefit/cost ratio was 4.1 !