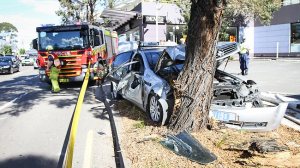 The Willoughby Crash Analysis Report is based on data covering the 4-year period 2008 to 2012. The aim of the report is to use the data contained within it to develop an Action Plan for 2013-17 (We are already well into 2014 – Ed.)

The report summary identified three aspects of crashes in Willoughby:

The population profile contains an interesting statistic. That is that the percentage of Chinese-born residents is a mere 7.0%.

The number of casualties has been progressively declining since peaking around 2000. Though not stated, it is assumed that one cause of the  reductions may be as a result of targeted road safety plans over the past years.

There is not a significant difference between casualty type (driver, passenger, motorcycle, cycle, pedestrian) between Willoughby, Sydney and NSW.

Speed related crashes in Willoughby are slightly less than for Sydney and well below the State average (influenced by country roads).

Just over 25% of speed related crashes were on local streets the rest being on Regional or State roads which are under the control of the RMS.

One thought on “Crash Analysis”